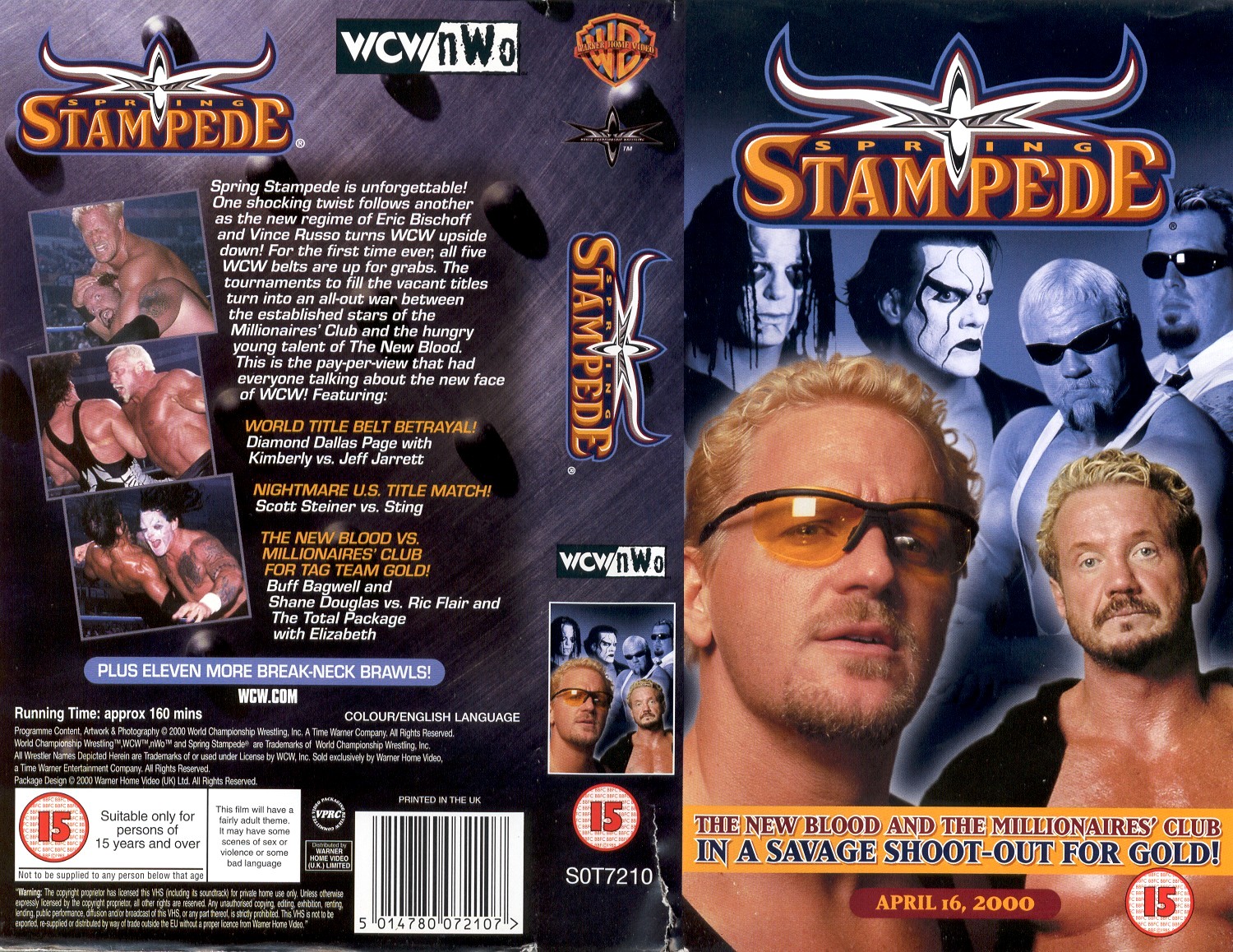 So here we are. Vince Russo and Eric Bischoff are back in control of WCW. Last Monday was the Reboot episode of Monday Nitro. On that show, Russo stripped everyone of their Title to start over. We also now have two rival factions, the New Blood vs the Millionaires Club. Some of the people in the New Blood are laughable: Buff Bagwell, Scott Steiner, Van Hammer, BRIAN KNOBBS. Instead of making this faction warfare, which it seems like WCW only knew how to do after the nWo, they should have just slowly integrated the new stars with the veterans. And that was happening before Russo showed up. Vampiro and the Wall were getting decent pushes.

Also, there were no matches announced for this show outside of the WCW Title match. We are told we get mini tournaments to crown new Champions.

Ric Flair is wrestling in his street clothes because Vince Russo wants all these matches to be fights. What would Russo know about actual fights? He can’t even book a fake fight. The Mamalukes have grown on me as I’ve continued to watch 2000 WCW.

Before the match starts Vince Russo comes out. Why did they pipe in cheers for his dubbed over music? Russo says this is unfair because there are two veterans against two rookies. So Russo sends out the Harris Brothers to make it four on two. You know, the Mamalukes vs Flair/Luger could have been a good match. But Russo thinks we don’t want to see this so he fucks everything up.

After the heels attack early on, Flair and Luger clean house. Flair applies the Figure Four then randomly lets it go. I’m pretty sure someone was suppose to interfere there and they were late, because Flair is looking around for someone. Two random guys come off and escort Disco Inferno away. Really? No one in security is going to stop them? Luger ends up putting on the Torture Rack on Johnny the Bull for the win.

What the fuck is this? Mancow is some Chicago DJ who had words with Jimmy Hart. He comes out with the ugliest entourage you could imagine. Jimmy Hart has some guy named Hale with him. He looks like generic big guy #38 that Hogan would just love to feud with and go over brother. Jimmy Hart hits a low blow and the worst clothesline ever. Mancow then pulls the ref on top of him as Hart hits the worst dive ever off the top. Lots of worst in this match. Hale tosses Mancow to the floor on to his entourage. Mancow recovers and uses a chair with the ref still down for the win. Next.

Billy Kidman comes out to beat up Jimmy Hart.

Why did the Wall change his look? He looked different in his cut off dress shirt and tie. Now he looks like an overweight jabroni in a wife beater. Neither one of these guys can carry a match so we just get traditional big man punches and kicks. They go to the outside but neither man can put the other through a table. Steiner rakes Wall’s eyes, so he can’t see that Steiner but the ref in front of him and Wall chokeslams the ref through the table. Another ref comes out to DQ Wall. What happened to the lax rules?

Bam Bam Bigelow lays out Ernest Miller backstage, so he comes out and attacks Mike Awesome. So I guess Bigelow gets Miller’s spot?

They dub over Awesome’s music with the same music as someone else but I can’t place my finger on it. Awesome does his trademark suicide dive over the railing onto Bigelow. Ernest Miller comes back out and takes out Bigelow. He then decides to dance instead of fight. So Awesome takes him out then hits a splash off the top for the win.

Oh and the music used to be for the Revolution.

Oh god. A match where Shane Douglas is the best worker in the ring. My opinion of Douglas has gone down since starting to watch WCW. People actually have signs for Douglas and Bagwell. Those have to be plants right? They get to the big hot tag two minutes into the match. Cash takes out Bagwell on the outside. Douglas hits a vertical suplex for the win while Big T literally just stands in the corner and watches out of breath. Stevie Ray and Big T argue after with Big T looking ready to pass out from exhaustion.

Mark Madden says he never liked Sting, and that’s a shoot! They haven’t talked in their six years of being in the company. Sting and Booker actually do the best wrestling on the show so far with their early exchanges. Booker drops Sting on the announce table on the outside to get control. Sting tries fighting back with the Stinger Splash but Booker hits him with a Harlem Sidekick in the gut. Another good sequence of counters, with Sting countering a suplex into a Scorpion Death Drop for the win. Booker wants Sting to get back in the ring. He does and the do fist bump. Good match by WCW 2000 standards.

Vampiro comes out firing with an overhead belly-to-belly and a clothesline off the top. Vampiro is dominating this whole match. I think Kidman has gotten two moves in and the crowd doesn’t seem to care. Kidman blocks the Nail in the Coffin. Vampiro applies an armbar and a fan yells “Break it off baby! Break if off and feed him with it!” Ha.

We cut to the back where a Dodge Charger pulls up. Is it Dominic Toretto? No, its Hulk Hogan. Hogan comes out and attacks Kidman. The ref is just letting this go for some reason. Hogan kills Kidman then tries to double arm chokeslam him through the announce table but it doesn’t break. Not selling for Hogan brother? That won’t fly. Hogan then bodyslams Kidman through it. Hogan puts Kidman back in the ring and makes the ref count three for Vamprio for the win.

Hogan gets on the mic and tells Bischoff he is coming for him. Hogan finally finds Bischoff in his office. Russo left to get the cops and they all pull guns on Hogan. Hogan gets arrested.

Terry Taylor tells Terry Funk that Norman Smiley is afraid to fight him and he is in catering. Everyone in catering rats out where Smiley is. Funk finds him in the bathroom. Funk dumps some diet cokes on him. CM Punk would be pissed. Smiley sprays Funk with a dishwashing hose. Smiley then hits him with a cookie sheet. Smiley climbs onto a pipe to avoid Funk. Funk hits him with a chair and Smiley falls through a table.

They finally find their way out to the ring. Smiley bashes Funk a few times with a chair. Smiley does the Big Wiggle to Funk but Funk clocks him in the head with a chair. Funk grabs a ladder but Dustin Rhodes comes out. He hits Funk with a chair then goes to the top, but Funk gets his leg up and the chair goes into Rhodes and he lands on the ladder. Funk then drops the ladder on Smiley and pins him to become the new WCW Hardcore Champion.

Vince Russo tells Booker he has to do Russo a favor.

Steiner charges at Awesome on the apron and Awesome jumps over and shoulder tackles him. Awesome hits his top rope clothesline. They exchange some more basic moves. Awesome goes to the top. Kevin Nash comes out and hits Awesome with the crutch and Steiner applies the Steiner Recliner for the win.

Vince Russo fires Dustin Rhodes. Russo says he created Goldust and he was the only one that made him worth a damn.

There is some kind of Cruiserweight Multi Man Match. It is a clusterfuck. It ends with Chris Candido getting help from Sunny to win the Cruiserweight Title.

Russo comes out with Douglas and Bagwell. Luger looks like he dipped himself in spray tanner before the match started. Luger mocks Bagwell’s dance and he looks like an idiot doing it. Flair pulls Douglas over the ropes then tags in. Flair gets some chops in before the heels double team him and get the upperhand. Luger gets the hot tag an d goes to work. Bagwell low blows Luger. But Bagwell accidentally hits Douglas coming off the top. Russo pulls Nick Patrick out of the ring and they shove each other before Russo pulls Patrick’s ref shirt off. Bryan Adams and Bryan Clark, aka Kronik, come out and take out Luger. Bagwell pins Luger for the win as Russo counts three.

Sting jumps on Steiner early and hits a crossbody to the outside. He goes for a splash off the stop but Steiner gets his knees up. Sting fights back but Steiner pulls a ref in front of him when Sting goes for a Stinger splash. Vampiro pulls Sting under the ring. When they reemerge Sting has blood on him and is passed out. Steiner wins with the Steiner Recliner.

Kimberly’s boobs are comically level big at this point. DDP sends Jarrett over the top and he lets Kimberly slap him after Jarrett hit her with a guitar on Nitro. They go and brawl through the crowd for a hot minute. Jarrett crotches DDP in the corner then uses a chair on DDP. The ref finally stops him after two chair shots. Why not stop him from using it in the first place?

DDP hits a Blue Thunder Bomb as they show Eric Bischoff on the ramp. Jarrett grabs some fans Positively Page books and rips it up. Kimberly grabs Jarrett’s hair and pulls him away from DDP. DDP starts a comeback and goes for the Diamond Cutter but Jarrett grabs the ropes and accidentally hits the ref. Jarrett uses the Title on DDP but DDP kicks out. Why the ref bump when they already used the chair earlier?

Jarrett applies the Figure Four. Bischoff comes to ringside as Kimberly grabs the guitar. DDP eventually gets to the ropes. Jarrett applies the Sleeper but DDP breaks it. Bischoff gets on the ropes to distract the ref. DDP hits the Diamond Cutter. Kimberly gets on the ropes and wants to use the guitar. She hits DDP with it. Jarrett hits the Stroke and gets the win. Kimberly and Bischoff hug after as the rest of the New Blood Champs come out to celebrate to close the show.

OVERALL: I actually thought the show started off okay (outside the Hart/Mancow shit), but it took a total nose dive after the Sting/Booker match. Everything after that became a typical WCW overbooked mess. It is like they get one thing right with this New Blood booking but get everything else wrong. You want to make Hogan a rebel? Okay. But don’t bitch out Billy Kidman and make him mainly focus on Eric Bischoff. They were so clearly trying to copy Austin/McMahon with this angle.

Jeff Jarrett was eventually getting the WCW Title. Of course they overbooked that as well. They put the New Blood in position of power early on with them winning all but the Hardcore Title. I would have maybe let Sting win the U.S. Title. But they wanted to make the Sting/Vampiro feud all super natural and shit. There’s too many negatives that outweigh the positives of this booking. And it only gets worse as we continue to move along in 2000 WCW.