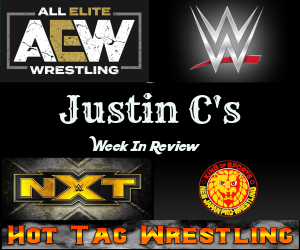 Welcome everyone! This is one of the many new features we will be introducing on Hot Tag Wrestling this week! As editor I really only step in and review shows when I need to fill in someone. So this weekly review column allows me to give my thoughts on the entire week that was in the world of pro wrestling.

THREE STARS OF THE WEEK

Time and time again, Zelina Vega continues to show her worth as a manager in the WWE. Not only is she extremely attractive, but she is damn fine at what she does. Now Zelina Vega has this group of “Extraordinarily Good Lucking Gentlemen” as I like to call them in Andrade, Angel Garza and Austin Theory. Zelina is the mouth piece of the group and she knows how to work a mic and she showed it on RAW this week. Her talking alone gives the group enough credibility. I’d like to see them add one more “heavy” to the group to be the enforcer. But with Zelina Vega’s gift of gab on the mic this group has the ability to make an impact on RAW.

I liked the debut of Kross on NXT this week. They have done a good job of hyping him up with the cryptic promos on NXT the last few weeks. Towards the end of NXT last week, we saw him and Scarlett Bourdeaux in the car as Johnny Gargano and Candice LeRae were leaving. This week Kross attacked Ciampa as he was talking about the end of his feud with Gargano. I think Kross/Ciampa is going to be a great launching feud for Kross. Ciampa is a NXT veteran so he knows what works and what doesn’t down there. Adding Scarlett with Kross is the smart thing to do as well.

When I was doing my alternate WWE Universe I booked the breakup of Sonya Deville and Mandy Rose a little differently. I had Rose turning on Sonya and joining up with Carmella and Charlotte Flair. Sonya then turned into a WCW Sting-lite character and it too her almost 5 months to get her hands on Mandy Rose. The WWE did the opposite here, and I thought Sonya Deville nailed her promo this past Friday on Smackdown. She sucked you in with believing that she wanted to explain everything to Mandy and maybe she was really sorry. Maybe she had feelings for Mandy. But it was the exact opposite. Sonya ran down Mandy in a promo that would have gotten some “ohhs” from a live crowd. I’m sure this is building to a mixed tag team match before the actual Sonya/Mandy match. It should be a multi-match program hopefully with a big blowoff down the line. But Sonya started the program off with a bang this past Friday.

Match of the Week- Daniel Bryan vs Cesaro: These two were given about 14 minutes but they went out there and beat the crap out of each other for those 14 minutes. It was as close to strong style as you will see in the WWE nowadays.

Dud of the Week- Jon Moxley vs Jake Hager: AEW did a good job of hyping this match up throughout the entire show. I liked them asking various stars and athletes who they thought would win. I liked the breakdown of Hager’s finisher by Taz. But the match went on way too long, just like the Edge/Orton match at Wrestlemania. They hyped it up as an all out brawl and we did not get that at all. Maybe it would have been better with a crowd in place. But even then, this match did not need over 30 minutes to get its story across.

Story of the Week- Money in the Bank Taking Place at WWE Headquarters- I’m not diving into the cuts here. I’m done talking about that. With the Money in the Bank ladder matches starting on the ground floor of WWE HQ and ending on the top, I fully expect another cinematic type match. I hope they go full Die Hard with his. I want someone in an elevator with “Now I Have A Steel Chair. Ho Ho Ho!” written on them. Maybe Jeff Hardy hangs from the side of the building on a fire hose. Or someone gets stuck in an elevator shaft. Can we get Milton from Office Space to make an appearance, protecting his stapler at all costs? I hope they go all out like that with this decision.