Looking Back at the WWF vs WCW Invasion (Part One)

Posted on November 8, 2019 by thechairmanstevenvincent

With recent events going on in WWE with NXT invading both Raw and Smackdown and the timing of my vintage viewings has reaching the summer of 2001. I figured now would be a perfect opportunity to write up a series of articles looking back at the WCW invasion of WWF in 2001. I’ll recap critical moments involving WCW during this

END_OF_DOCUMENT_TOKEN_TO_BE_REPLACED

Is It Clobbering Time Again?

A lot and I mean, a lot has changed in professional wrestling since CM Punk was eliminated from the Royal Rumble by Kane five years ago. Punk took his per-verbal ball and went home. We all thought it was a work; it turned out not to be. Punk aired his dirty laundry on, arguably, the most well known shoot

END_OF_DOCUMENT_TOKEN_TO_BE_REPLACED

The Good, the Bad and the Hokie: Dean Ambrose’s Run in the WWE

To the surprise of just about every wrestling fan in the world the WWE put out a press release stating Dean Ambrose, Jonathon Good, would not be renewing his contract once it expires after Wrestlemania. The dark horse star of the past six plus years is leaving the WWE. That or they’re all plotting a major story line. Either way,

END_OF_DOCUMENT_TOKEN_TO_BE_REPLACED

We are just under five months away from Wrestlemania. So it is time for me to take a stab at the Wrestlemania 35 card for the last time. There have been little nuggets leaking out about the schedule over the last few weeks and that played a part in my match making decisions. Had I wrote this and posted it

END_OF_DOCUMENT_TOKEN_TO_BE_REPLACED

JC’s Top Rope Report: The Truth About The Undertaker vs Triple H Rivalry

We’re a couple days away from the WWE Super Showdown in Australia. It’s a 5 a.m. start for me in the east. I may catch some of it but I have a very busy Saturday planned out, so more than likely I will only catch some of the highlights of it. But if you believe the WWE, I am

END_OF_DOCUMENT_TOKEN_TO_BE_REPLACED

So it seems like every week, the wrestling Twitter world finds something new to get all riled up about. They grab their pitchforks and take to Twitter and get into a big fight and a war of words ensues. This weekend it was all the result of one column. Over at No DQ.com, writer Steven Luke gave his opinion on

END_OF_DOCUMENT_TOKEN_TO_BE_REPLACED 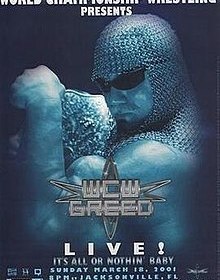 Oh you thought I forgot about this didn’t you? Nope. With so much wrestling in August and football season starting back up there was a lot going. But my Bills got their asses handed to them this week and I can’t watch any football related show today. So I’m here to watch the final WCW PPV from my viewing experience.

END_OF_DOCUMENT_TOKEN_TO_BE_REPLACED

Well, I normally try to do this right after SummerSlam. I may be a few weeks late but I’m here to give you my second round of Wrestlemania 35 predictions! Lets take a look at my first set of predictions right after Wrestlemania 34: Smackdown Women’s Championship: Asuka (c) vs Becky Lynch Randy Orton vs Samoa Joe Bobby Lashley vs

END_OF_DOCUMENT_TOKEN_TO_BE_REPLACED

SummerSlam weekend has come and gone once again. The WWE put on one of their first good shows in a very long time. It still didn’t beat NXT Takeover from the night before, but I think SummerSlam might have been the second or third best WWE PPV of the year. There were plenty of stories coming out of the weekend.

END_OF_DOCUMENT_TOKEN_TO_BE_REPLACED

Yes, I attended WWE Extreme Rules in Pittsburgh on Sunday night and traveled back to my hometown of Buffalo on Monday for RAW. And I’m pretty much all wrestling’d out after those two shows. Of course, the three hour drive both ways is pretty exhausting as well. I have a handful of thoughts after attending both shows. I’ll get my